SHAPE IN MOTION HAS EVOLVED, DELIVERING A NEW LEVEL OF FORGIVENESS, SPEED AND DISTANCE

With the original SIM, the company focused on reshaping the driver to deliver speed and aerodynamics at the most critical stage of the swing – those milliseconds right before impact. Embracing the evolution of design, now TaylorMade has reinvented the way drivers are constructed with an increased focus on enhanced forgiveness while maintaining speed and optimal launch conditions. 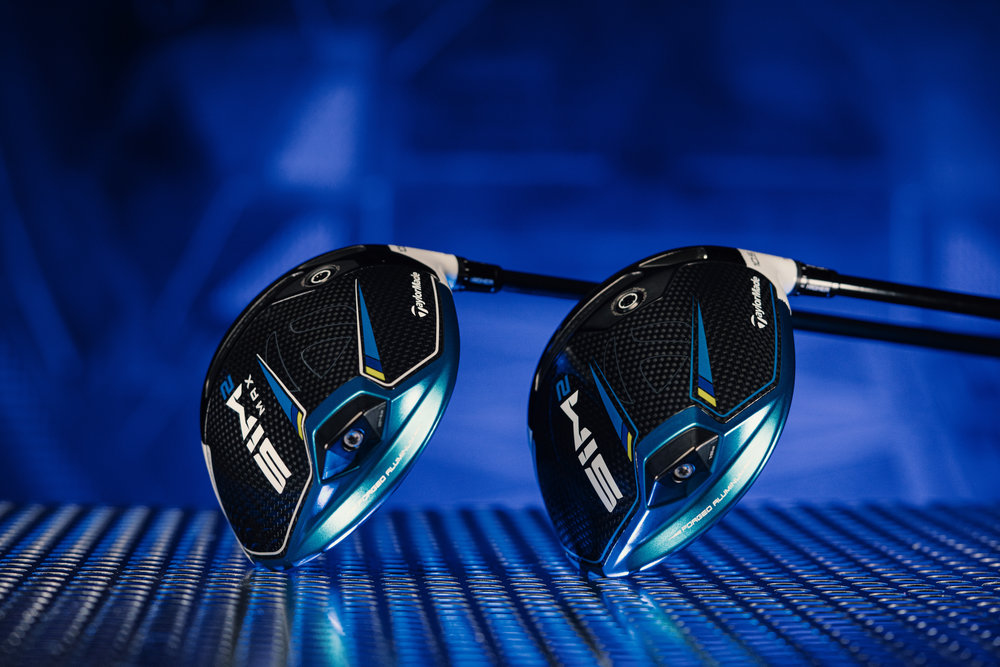 Forgiveness equals confidence. In 2020, we built a driver that was aerodynamic, promoted favorable launch properties and had one of the hottest faces in golf. By increasing forgiveness with SIM2, SIM2 Max and SIM2 Max•D, we’ve truly engineered a driver that has no tradeoffs. Golfers can step to the tee box and have the freedom to swing with confidence every time. Knowing they have a driver that checks all the boxes: Forgiveness, speed and distance with a beautifully crafted aesthetic.

To unlock a new dimension of forgiveness, TaylorMade engineers were forced to completely rethink how drivers are built from the ground up. By fixating on the process and materials, they discovered a hidden key in the form of a new design called Forged Ring Construction. Utilising a lightweight and high strength aluminium that’s precision milled, the adjoining feature unites the critical components of the driver head into a singular force. 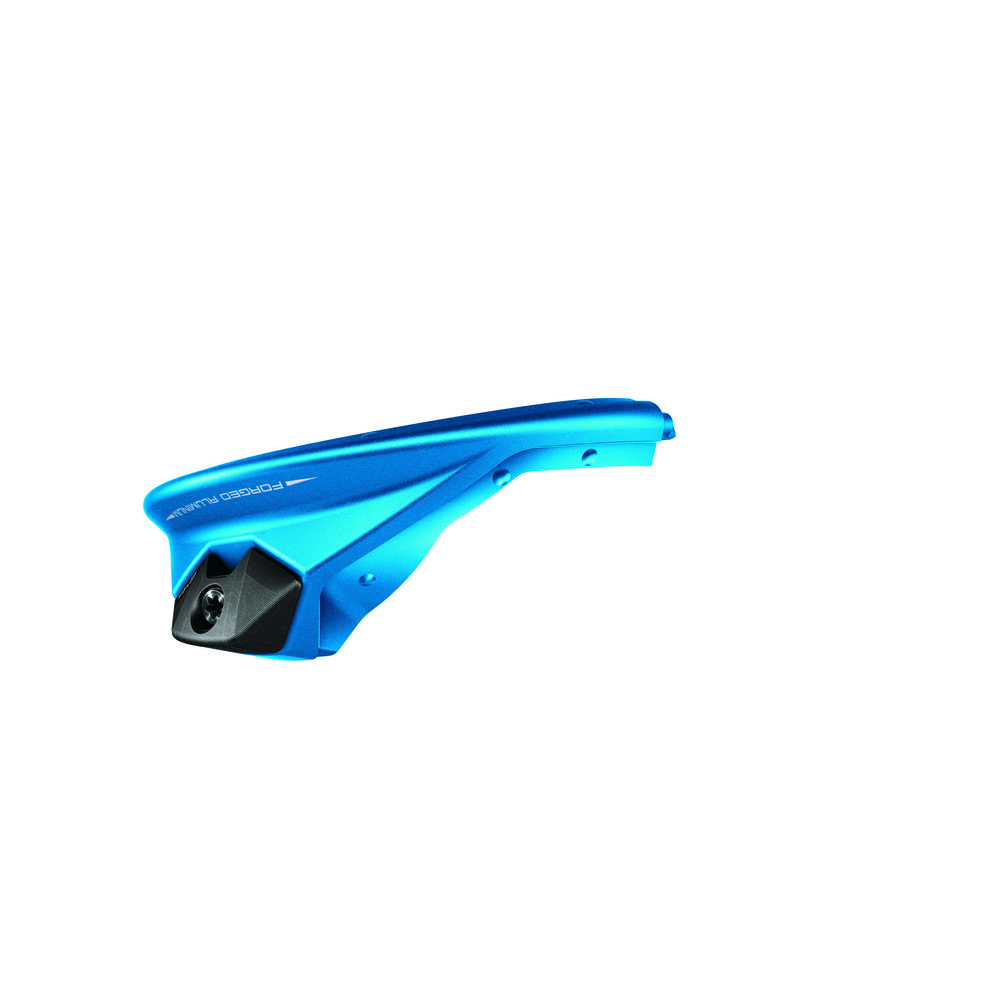 As the defining component of SIM2, SIM2 Max and SIM2 Max•D, the forged aluminium ring is one of four crucial elements of the unique construction – each serving a vital function that allows the driver to be forgiving, fast and powerful. The other modules are the carbon crown, carbon sole and milled back face cup.

TaylorMade’s journey to SIM2 began with the lightweight carbon composite technology the company developed over the course of 15-plus years. The six-layer composite material, which was refined throughout the lifespan of the popular M series and SIM, is used on the crown of SIM2, SIM2 Max and SIM2 Max•D.

A new high-strength carbon was developed precisely for the sole and designed for enhanced durability in protection against damage from turf interaction and contact at high speeds. The nine-layers of advanced carbon span the entire sole while simultaneously shaping the asymmetric Inertia Generator, which is designed to produce faster club head speeds through precise geometry and aerodynamic analysis.

The expanded use of carbon saves a considerable amount of weight that has been redeployed onto the Inertia Generator in the form of a heavy rear weight (16g SIM2, 24g SIM2 Max and 22g SIM2 Max•D). Placing this substantial weight low and back in the club moves the CG projection to centre face, optimises launch conditions and maximises MOI – more commonly described as forgiveness.

The black satin carbon crown and contrasting chalk colourway help frame the ball at address and improve alignment. A high-gloss black carbon on the sole provides an eye-catching look and premium aesthetic when paired with blue accents from the aluminium ring. 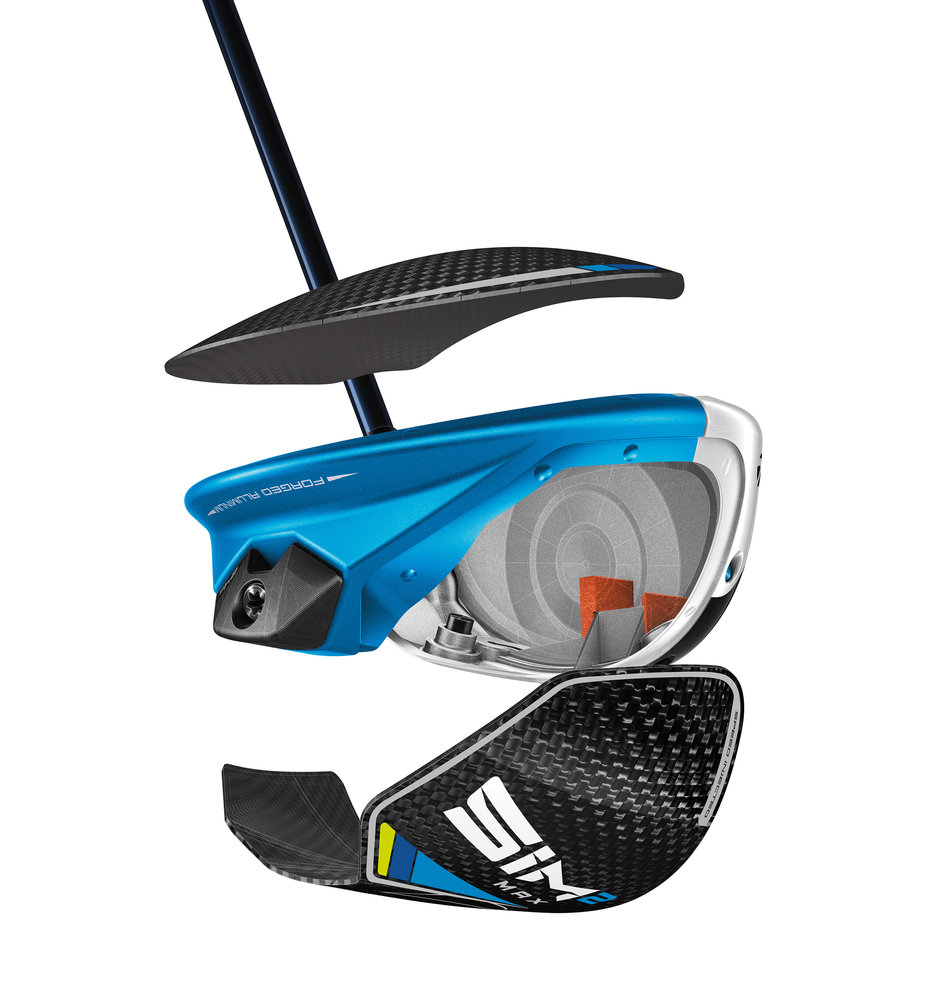 MILLED BACK FACE CUP WITH AN INTELLIGENTLY OPTIMISED SWEET SPOT

The milled back face cup is the only part of the driver head that is crafted from titanium. The strong and resilient material facilitates energy transfer to encourage faster ball speeds. Behind the face, internal CNC milling varies face thickness and pinpoints performance where golfers need it the most.

Relying on the data used to develop Twist Face®, the company mapped the most common impact locations among golfers of all skill levels – which revealed a mis-hit pattern that extends from low heel to high toe. The milling process allows the company to precisely tune the thickness of the face to promote peak speed in those areas. This intelligently engineered sweet spot has an oval shape and stretches diagonally from the high toe toward the low heel. Ultimately, it results in a sweet spot that is designed to capture more shots where golfers are more likely to hit it on the face. 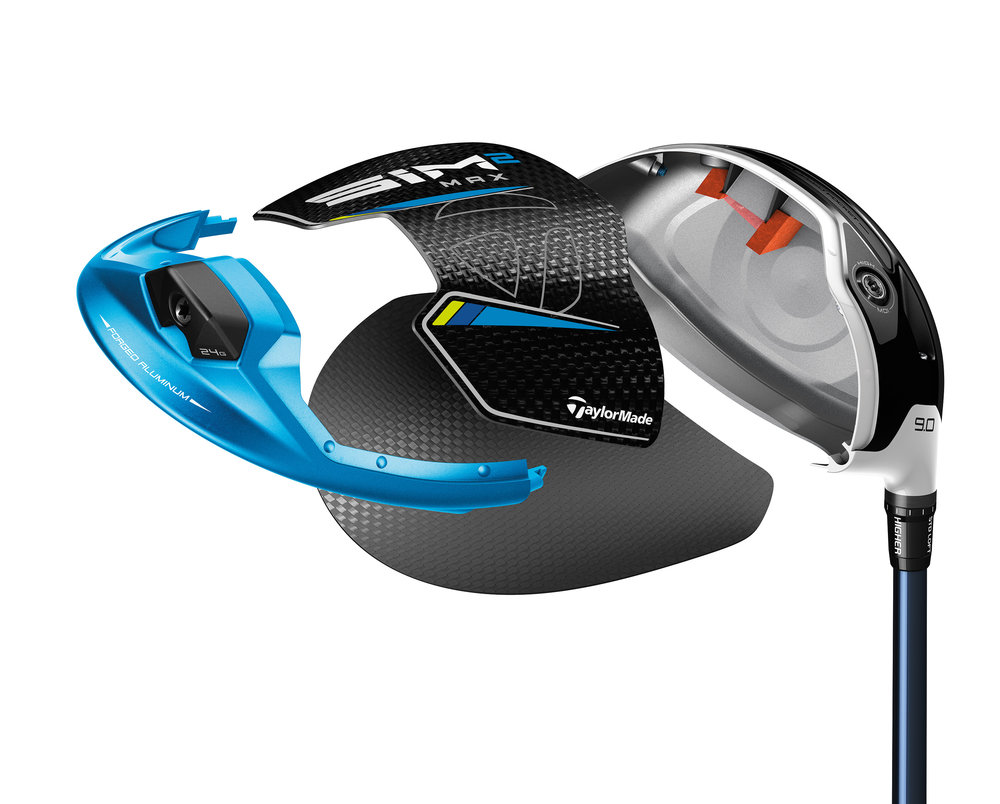 In 2019, TaylorMade took Twist Face® – the iconic face curvature that’s designed to straighten ball flight – to the next level of performance with Speed Injected Twist Face, exposing the false narrative that speed limits had been reached for metalwoods. The industry-leading technology continues to provide massive benefits with SIM2, SIM2 Max and SIM2 Max•D, as each driver head is inspected, measured and tuned for maximum speed and to ensure conformity; a process truly unmatched in the golf industry.

In recent years, golfers grew accustomed to seeing the Speed Injection Ports on the face of the driver. New for 2021, the port has been relocated to the outer toe. With the CNC milling now across the entire back of the face, designers were able to precisely tune the thickness of the titanium to promote peak speed on a specific area slightly to the toe side. With that development, the company is now able to efficiently manipulate speed across the entire face using a single port. The result is a level of precision that ensures every golfer gets a hot and fast driver head.

The patented Thru-Slot Speed Pocket rests on the sole of the driver, maintaining the marquee purpose of protecting ball speed and performance on shots struck low on the face. 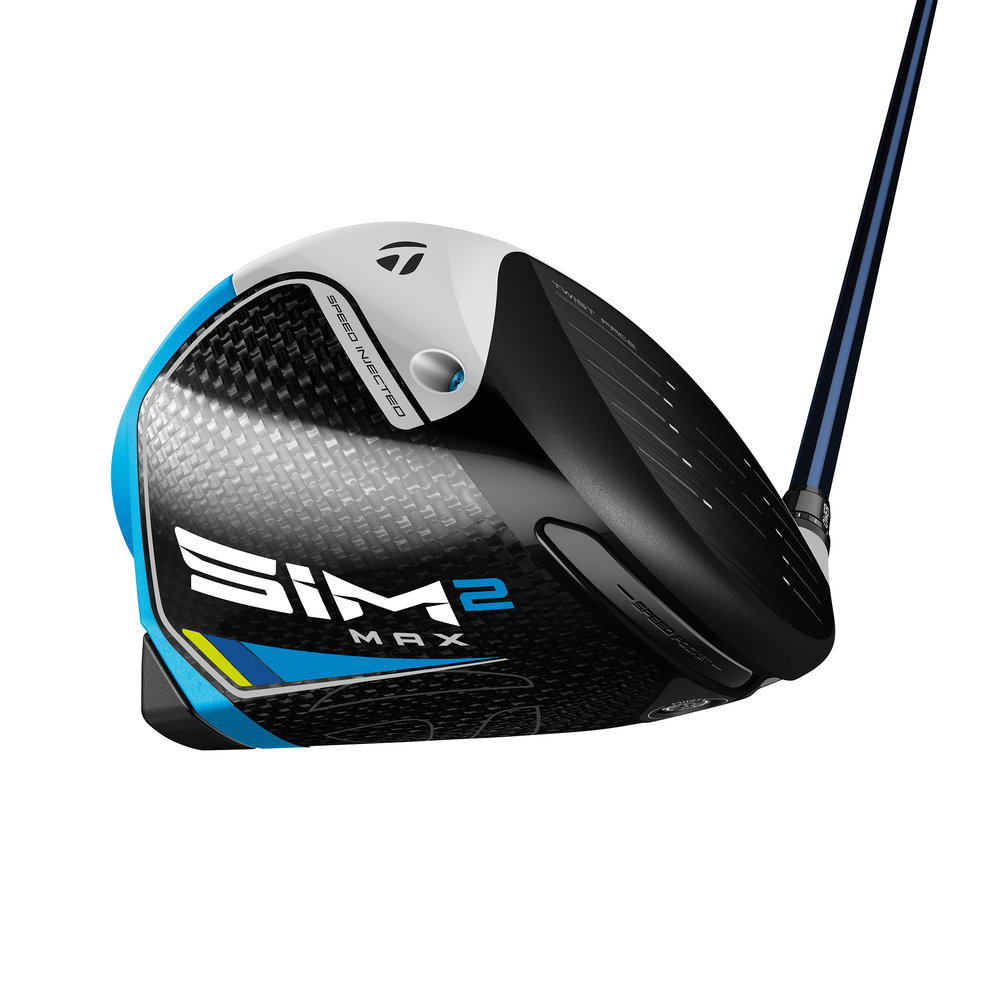 Historically, draw bias drivers have not been forgiving – as the higher CG needed to create the necessary spin led to a lower MOI. Company research indicates that design is counterintuitive. As you may expect, data suggest that high handicap players with severe right-miss tendencies gravitate to draw bias clubs. This group needs the forgiveness more than others.

That is why TaylorMade has flipped this design convention on its head. SIM2 Max•D delivers powerful draw-bias with a level of MOI and forgiveness not before seen in a draw driver from TaylorMade. By shifting the entire asymmetric Inertia Generator towards the heel, engineers were able to obtain draw-bias properties while also keeping its full function of aerodynamics and forgiveness.

The new SIM2 Max•D was designed purely with the golfer in mind. We looked closely at data and trends to truly understand who needs a draw bias driver and why. From there we challenged the norms of driver engineering to create a finished product that fits the needs of a large part of the golfing world’s population.

Traditional driver designs come with a trade-off, but TaylorMade journeyed beyond tradition to obtain power, speed, and forgiveness in a low spin driver. The reconstructed SIM2 delivers high MOI properties with a heavy 16g steel weight positioned on the Inertia Generator. The TPS Front Weight is strategically located behind the face to encourage optimal launch with low spin characteristics, delivering complete performance that is low on spin and high on forgiveness.

With an intense focus on speed and forgiveness, the SIM2 Max delivers high MOI properties with a heavy 24g tungsten weight positioned on the Inertia Generator. The TPS Front Weight is strategically located on the sole of the club to encourage the optimal mid-to-high launch with mid-to-low spin properties, delivering complete performance and max forgiveness.

Traditional draw-bias drivers come with a trade-off, sacrificing forgiveness for a right-to-left ball flight. The all-new SIM2 Max•D features a repositioned Inertia Generator that’s closer to the heel, encouraging a heel CG that’s low and back for more forgiveness – designed to deliver a higher launch with the largest, most forgiving face in the SIM2 line-up. The end result, a draw-biased driver without compromise.

These three drivers enable us to deliver vastly different performance for a variety of players. We know there are a lot of different golfers out there. People will need less spin. People who need more spin. People who hit it straight and people who need draw bias. So, we are delivering across the board with SIM2, SIM2 Max and SIM2 Max•D – separating them in terms of launch and spin. The unifying feature among all three is forgiveness – we’ve increased MOI throughout the entire SIM2 family. 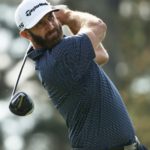 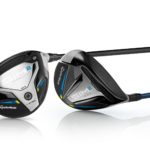